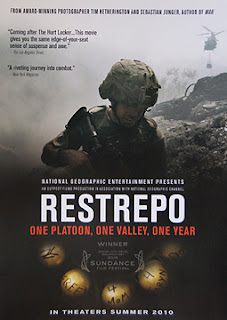 Restrepo was the name of what was once the most dangerous outpost in the US military, in the Korengal Valley of eastern Afghanistan. The outpost was named for Juan "Doc" Restrepo, one of the first casualties of the Army platoon filmmakers Tim Hetherington and Sebastian Junger stayed with for a year in 2007-2008, chronicling life on the frontline of 21st-century warfare.  Hetherington and Junger's feature-length documentary, Restrepo, is a powerful and important film, a "90-minute deployment" to Afghanistan and an homage to the soldiers who serve there.
I had an opportunity to attend a screening of the film on July 6 at the New York State Museum, in connection with the museum's exhibition Citizen Soldier. The experience was, to say the least, moving, both the picture itself and the discussion afterward. There's little question why the movie is getting universally excellent reviews; it is, at once, harrowingly dramatic and incisively deadpan, passionate and detached, engaged and cool. Restrepo takes no political stand on the war, yet in its apparent neutrality it is hardly passive. The filmmakers take as their cause the lived experience of men who fight for and are killed defending policies they didn't make, in the name of people who've mostly forgotten they are there.
The film will surely go down as a milestone of documentary art. It seems safe to say that when most people think of documentary film today, they think of the sarcastic polemics of Michael Moore, or the earnest history of Ken Burns. Restrepo has nothing to do with either of these styles; it harkens back to the best tradition of cinéma vérité, to pictures like Barbara Kopple's Harlan County USA and D.A. Pennebaker's Dont Look Back. Cinéma vérité, French for "cinema of truth," designates a naturalistic style of filmmaking where the camera becomes a fly-on-the-wall witness to real life. The ethos is one of transparency; filmmakers working in this mode want you to feel like your looking over a person's shoulder rather than watching him on a screen.  Hetherington and Junger achieve this with startling clarity, producing an intimacy that at times is almost too much to bear. They did this by becoming part of the platoon, taking part in the danger, fear, boredom, isolation, brotherhood, and fun the soldiers themselves share.
When you spend that much time with someone you become friends with them, and the filmmakers treat the trust they developed with the men in the platoon with a care bordering on reverence. Their bond extends to the way they portray the Afghan people, seeing them, as through the through the eyes of the soldiers, as starkly Other. This viewpoint produces perceptive, disquieting moments in the film, as in a scene in a tribal council when we watch a village elder attempt in vain to navigate a straw into a juice box. "Hearts and minds," one soldier says, evoking the goal of the US to gain the sympathy of the people. "Yeah," quips his buddy, "we'll take their hearts and we'll take their minds." At the end of the film, we learn that after five years of fighting, the US pulled out of the Korengal in April, 2010. The Washington Post described the decision as "a hard lesson in the limits of American power."
The audience in the State Museum auditorium was in no mood for geopolitical analysis during the discussion that followed the film. A few dissenters, including some veterans, attempted to steer the talk to politics and the morals of the war, to little avail. After what the people in the room had just seen together, the energy was about honoring the men whose lives are portrayed in the movie, not questioning the meaning of their service. Filmmaker Hetherington was joined by Brendan O'Byrne, a veteran of the Restrepo platoon, and Troy Steward, an Afghanistan veteran who monitors the war in Bouhammer's Afghan Blog. Hetherington began the discussion by explaining that he and Junger's sole
objective as filmmakers was "to bring home the reality of what soldiers go through"; the experience, he said, "should be seen, digested, understood, and honored."  From there, the attention quickly shifted to O'Byrne, who gave searing testimony to the effect of the war on his life. "I got home and all I wanted to do was fight," he said, ending up battling alcoholism until he was redeemed by his wife, who he creditied with loving him even when he could not love himself.
The courage of O'Byrne's candor unleashed a flood of emotion from the audience, particularly other current and retired service-members. One by one men and women rose to tell their own experience and offer their own love to the clearly distressed O'Byrne. At one point, he described the emotional torment of seeing a comrade killed in action, and criticized the military for not knowing how to deal with the trauma. Treatment for PTSD should be part of a soldier's basic training, he said. Discussions about the inevitability of death and how to process it ought to begin before men are sent to fight, not after they've been subjected to the horror.
I asked O'Byrne what the value of Restrepo is to him, who lived through the experience. "Discussion," he said. "That people see it and talk about it. Right now there are guys over there getting shot at and dying. People need to know about it, what it's like, and be able to discuss it. It doesn't matter if they agree or disagree. Just that they're talking."
at July 22, 2010 No comments:

Battlesight brings together the work of three exceptional photographers.

Cheryl Diaz Meyer shared the 2004 Pulitzer Prize for Breaking News Photography with David Leeson for “eloquent photographs depicting both the violence and poignancy of the war with Iraq,” made while both were senior staff photographers of The Dallas Morning News. Diaz Meyer covered the US-led invasion of Iraq as an embedded journalist attached to the 2nd Tank Battalion of the 1st Marine Division. After the fall of Baghdad, she continued to cover the aftermath as a unilateral journalist. She has returned to Iraq numerous times, to cover the capture of Saddam Hussein and the infamous “spider hole,” the Al Mehdi death squads, the Iranian infiltration into Basra, and the region’s tormented women, who set themselves on fire in an ancient practice of self-immolation. Diaz Meyer’s work in Iraq was also awarded the Visa D’Or Daily Press Award 2003 at Visa Pour L’Image in Perpignan, France. She currently works as a freelance photographer.
Balazs Gardi is a Hungarian photographer who documents the everyday life of marginalized peoples and communities facing humanitarian crises. He has photographed the effects of war in Afghanistan and Pakistan both as a unilateral journalist and embedded with troops from the United States, Canada and Britain. His current long-term project, Facing Water Crises,  examines, as he writes, "the vital yet destructive presence, crippling absence and strategic value of water worldwide." Now working independently, Gardi was staff photographer at Nepszabadsag, Hungary's largest national daily, from 1996 to 2003. He studied journalism and photography in Budapest and at the University of Wales, Cardiff. Among his numerous honors are the Prix Bayeux War Correspondents Award, the PX3 Photographer of the Year Award, three World Press Photo awards, a PDN Photography Prize, and the Global Vision Award from Pictures of the Year International. He is the recipient of grants from the Alexia Foundation for World Peace  and Getty Images.
Teru Kuwayama has published photographs in Time, Newsweek, National Geographic, Outside, Fortune, and Vibe, among other publications. His work on the Tibetan refugee diaspora received awards from the New York Foundation for the Arts and the Alexia Foundation for World Peace, and were exhibited at the United Nations and the Open Society Institute. In 2004, Esquire profiled him as among the “Best and Brightest” of his generation for his reportage on the occupation of Iraq. In 2005, PDN cited his work in Kashmir in a selection of the most iconic images in contemporary photography. In 2006 he received a Nikon Storyteller Award, a Days Japan International Photojournalism Award, and a W. Eugene Smith fellowship for his work on Afghanistan and northern Pakistan. Kuwayama is the founder of Lightstalkers, a professional and social network of photographers, journalists and other "unconventional travelers" in the media, NGOs, military, etc. He recently completed a Knight Fellowship at Stanford University and received a 2010

A site and an exhibition 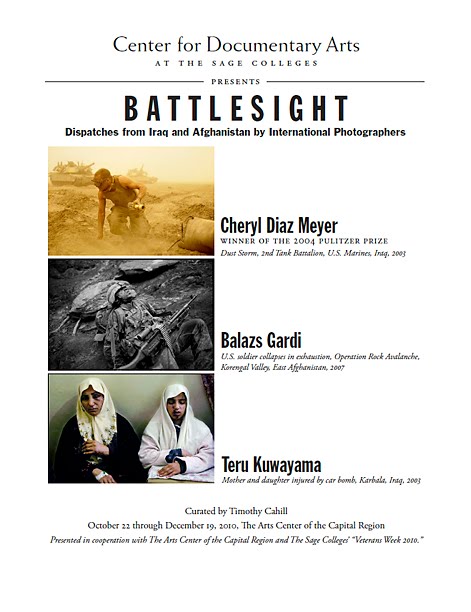 Battlesight is an exhibition of photographs from the central fronts of what was formerly called the "War on Terror," in truth two separate wars lead by the United States in Afghanistan and Iraq, and touching Pakistan, Iran and the whole Middle East/Southern Asia region. These are wars that, despite their long duration (the first troops were sent to Afghanistan in 2001, shortly after 9/11), the American public knows relatively little about, and today sees even less of, mostly brief clips on TV and a decreasing number of images in the press. Today, unless you are, have been, or know someone in the military, the wars in Iraq and Afghanistan (renamed the "Overseas Contingency Operation" by the Obama Administration) are being fought far from American awareness. Battlesight features the work of internationally renowned photojournalists Cheryl Diaz Meyer, Balazs Gardi, and Teru Kuwayama. Sometimes embedded with US or Coalition forces, sometimes working independently, these photographers have risked their safety to bear witness to the realities and consequences of warfare on combatants and civilians. For their work, they have won numerous international awards, including a Pulitzer Prize.


The Center for Documentary Arts at The Sage Colleges is an education center founded to address humanitarian issues through documentary art. As director, I've organized Battlesight to make a statement about the Center's chief mission, which is, through the work of documentary artists, to take part in the public conversation about issues that confront individuals and the world community. Whether the conversation is a polite exchange or passionate debate does not matter nearly as much as the fact that it expands and deepens our engagement with the world. Documentary artists are committed to reporting the factual and emotional truth of the world. The term you will encounter again and again on this site, the central thrust of my concern, is bearing witness. This simple act, when undertaken by caring artists, transforms reportage into an act of empathy, the first step toward compassion and the ethical foundation of the Center for Documentary Arts. In posts to come, I will talk more about the Center's mission and plans for Battlesight. I'll post images, news, essays, and interviews, and explore the issues that surround the show and work like it.
at July 22, 2010 No comments: