Once the ruckus has died down and we've left the guys to untie Mack, which they don't do till he's seriously late for his shift, we females douse off our running sweat with bottled water, ignoring the shouts of "Wet T-shirt time!" and take out our T-Rats. Morning is the only time I can really chow down, before the heat and my nerves get too bad—if you can call T-Rations chow. Tubes of green eggs that shake like a fat lady's flab, mushes of unidentifiable—well, mush. I shovel it all in anyway, needing the strength. Then we're off to our squads, and that's the last I'll see of another female till tonight—an American female, that is.

By the time my team arrives at the checkpoint, not only are the usual civilians already there, but I see that girl Naema right away, too. I'm heading over to say hi when Kormick barks, "Brady!" At least he didn't call me Tits or Pinkass.  [Read more] 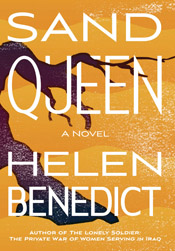 So begins another day in Iraq for US soldier Kate Brady, the heroine of Helen Benedict's powerful new novel, Sand Queen. Heroine may be entirely the wrong word for this teenager thrust into a world of brutality she can neither comprehend nor control, particularly in carrying out the unpleasant duties of a dubious foreign policy. As we follow nineteen-year-old Kate through the inferno of the Iraq War, we are repeatedly reminded that the most heroic labor a soldier may undertake is to survive the experience with her soul intact.

I met Helen Benedict last month when we both participated in the Festival of Writers at Rensselaerville, New York. I was showing photographs from the exhibit Battlesight and Helen read from Sand Queen, both of which describe the horrors and ambiguities of the war in Iraq. Our work was the common ground from which we embarked on a rich journey of ideas and observations.

Helen is the author of six novels and five books of nonfiction, which she teaches at the Columbia University Graduate School of Journalism. Her novels, quoting from Wikipedia, "explore the themes of displacement, isolation, racism, and sexism, often through the eyes of people who fall outside the predominant culture." Helen has written extensively about the effect of warfare on those who fight, in particular women in the US armed forces. In 2009, she published The Lonely Soldier: The Private War of Women Serving in Iraq,  a nonfiction book profiling five women's experiences in the military. Lonely Soldier exposed the indignity, injustice, abuse, and neglect women endure when they place themselves in service to their country. Much of the mistreatment is sexual and sexist, including seduction by recruiters, harassment and rape by fellow soldiers and superiors, and contempt from commanders. These, on top of the pressures all soldiers face—the harshness of day-to-day existence, the atrocities of the battlefield, the estrangement, dislocation, and trauma of life back home.

The Lonely Soldier is one of those books that makes your anger rise the deeper into it you go. It cast a bright light on sexual abuse in the armed forces and raised the awareness of the public and the authorities. In its wake, Helen lectured at military academies and testified twice before Congress on behalf of women soldiers. Her achievement as a journalist gave her standing as an expert and influenced policy.

Having written the book, having sat before Congress, even having adapted the material into a play, however, Helen knew the work was not complete. The complexity of the subject was more than nonfiction could contain, she told me. At that point, we had entered the sphere that animates this site and the Center for Documentary Arts—a sphere where art conveys truths that lie beyond facts.  Aestheticizing reality is often the only way to fully express it. The outrages and attacks Kate Brady suffers in Sand Queen are much the same as those described in Lonely Soldier, but for the reader the experience is far more intimate and painful.

"I came to realize," Helen said in an interview we did together, "even after interviewing more than forty women who served in the Iraq War and doing a lot of other research too, that there was more to say—an internal, private story of war that lay in the soldiers’ silences, jokes, and tears. Those moments are closed to the journalist, but they are exactly where fiction can go."

She expanded on this point in an essay "Why I Wrote a War Novel," in On the Issues Magazine:

I wanted to tell that hidden story, but I knew much of it lay beyond what these women were willing or even able to say aloud. Some couldn't speak because they didn't have the words, some were too afraid, others too proud, and yet others too ashamed. . . . So I turned to fiction, where I could combine my interviews, research and imagination to fill in those silences and get to the uncensored story of war -- to how it really feels to be in a war day in and day out, from the long stretches of boredom to the worst moments of violence, and all that happens in the minutes, hours and months in between.


Sand Queen achieves this through the voice of Kate Brady, an innocent who joins the military in search of honor and finds instead cruelty that ranges from brutish to sadistic, a viciousness expressed physically, psychologically, psychically, existentially. As the novel begins, we meet Kate already affected by the experience, having adjusted to the barbarism by adopting it against her nature. The reader follows her as she wades ever deeper into this transformation, experiencing its effect through her senses and understanding it through her developing awareness.


Briefly, Kate's destiny crosses with that of an Iraqi medical student called Naema Jassim, whose family has been driven out of their Baghdad home only to have her father and brother imprisoned in an American raid. The novel cuts between the two women as their paths converge and separate and each endures her own descent into the maelstrom. The journey is harsh, as the excerpt at the beginning of this post suggests, and there were times I had to put the book down and reset. Yet nothing is gratuitous or played for sensation in the book. Never does the suffering seem anything but authentic, making it all the more gutting.


Helen and Soho Press have kindly allowed me to run an extended excerpt of the novel here; you can find it and my interview with the author on the Helen Benedict page at the top of the blog. The conviction of the Center for Documentary Arts is that certain artworks call us to higher awareness and deeper connection to the world. When I speak of the "documentary arts," I am thinking of a novel like Sand Queen as much as the reportage of the Battlesight photographers. It matters not if the art is factual or imaginative, narrative or lyric, unsettling or inspiring. Truth has many guises, but speaks in one voice. 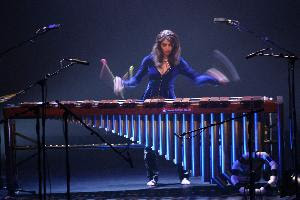 Evelyn Glennie is a virtuoso percussionist who has been profoundly deaf since age 12. She is an incandescent artist who continually expands one's capacity for wonder. This TED talk, recorded in 2003, reinterprets the act of listening, opening pathways for experiencing sound with one's whole body and being. It concludes with a sublime performance.
Photo: James Wilson/©Evelyn Glennie
at August 06, 2011 4 comments: