From 2008 to 2013, Art & Document was the voice of the Center for Documentary Arts, a nonprofit project founded by Timothy Cahill at the Sage Colleges of upstate New York. Situated at the crossroads of art, ethics, faith, and conscience, the blog continues the Center's mission to present artists, writers, and thinkers who, in their lives and works, partake of the sacred, bear witness to suffering, and manifest beauty, dignity, and charity. 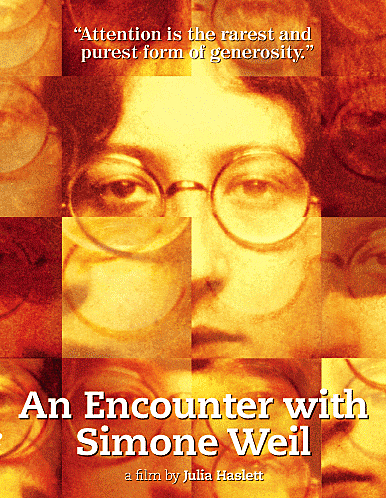 The following is a press release for the Center's upcoming screening of Julia Haslett's exquisite documentary An Encounter with Simone Weil. For more about Simone Weil and Julia Haslett, see my post here.

Quest for a compassionate life is subject of film to be screened
at Opalka Gallery October 16
Dialogue with director Julia Haslett follows exclusive presentation of her
acclaimed documentary An Encounter with Simone Weil
Acclaimed director Julia Haslett will lead a discussion following the screening of her new documentary An Encounter with Simone Weil on Sunday, October 16 at 4 p.m. at the Opalka Gallery at the Sage College of Albany. The exclusive Capital Region screening and discussion is organized by the Center for Documentary Arts at The Sage Colleges and the Opalka Gallery. The event is opened to the public.
An Encounter with Simone Weil is a moving portrait of French philosopher, educator, and activist Simone Weil (1909-1943), who spent most of her too-short life advocating for the socially and politically disadvantaged. Using Weil’s writings and teachings, Haslett tells the dramatic story of an extraordinary young woman whose decision to act on her convictions led her into hardship and spiritual revelation. In her quest to understand Weil (pronounced “veigh”), filmmaker Julia Haslett confronts profound personal questions about her own moral responsibility toward society at large and her family.
Haslett begins with Weil’s belief that, “Attention is the rarest and purest form of generosity.” With this quotation as the film’s moral center, Weil’s extraordinary biography is revealed through archival film shot during her lifetime, previously unseen family photos, and modern footage of places she lived and worked, as well as interviews with key people connected to Weil. Haslett then uses Weil’s experience as a framework for her own life, including intimate vérité footage of the filmmaker’s family and personal hardships. Drawing on current news and observational footage, Haslett’s narration draws provocative comparisons between Weil’s insight and the world today. The result: a deeply moving and unique film that questions what it means to bear witness to suffering, and plumbs the quest to live a compassionate life.
Filmmaker Michael Moore chose An Encounter with Simone Weil for a Special Founders Prize at the 2011 Traverse City Film Festival. The documentary was also an official selection at the prestigious Full Frame Documentary Festival earlier this year.
In her brief life, Simone Weil (1909-1943) fought in the Spanish Civil War, worked as a machine operator and farm laborer, debated Trotsky, and was part of the French Resistance. The daughter of affluent Jewish parents, she spent her life advocating for the poor and disenfranchised in France and for colonized people around the world, bravely organizing and writing on their behalf. A consummate outsider, who distrusted ideologies of any kind, Weil left behind a body of work that fills fifteen volumes and established her as a brilliant political, social, and spiritual thinker.
In her writings, she analyzed power and its dehumanizing effects, outlined a doctrine of empathy for human suffering, and critiqued Stalinism long before most of the French left-wing. She believed intellectual work should be combined with physical work, and that theories should evolve from close observation and direct experience. And, after three Christian mystical experiences, she began grappling with religious faith, its role in human history, and the shortcomings of organized religion. Her ideas have influenced countless people, including Susan Sontag, Graham Greene, and T.S. Eliot. The New York Times described her as “one of the most brilliant and original minds of twentieth-century France.” But by far her biggest advocate was the existentialist philosopher Albert Camus, who played a major role in getting her work published after her death.
“I made this film for personal and political reasons,” says director Haslett. “The questions it poses are fundamental and the stakes it raises are quite literally life or death. The film can take a while to sink in, but my idealistic hope is that once it does, it will bring a little more compassion into the world.”
Haslett will discuss the making of the film, and answer audience questions, immediately following the screening. The one-time-only showing will be in the theater of the Opalka Gallery on the campus of the Sage College of Albany, 140 New Scotland Road. Parking is free on campus. Admission is $5, free for Sage students with a valid ID.


The screening and discussion are a presentation of the Opalka Gallery and the Center for Documentary Arts, as part of the 2011 MoHu Festival of Arts. The event inaugurates the Center’s ongoing series of film screenings, readings, and artist appearances featuring narratives of hope, dignity, and compassion that can transform individual lives and impact collective experience.

"Remember that fear devours the soul"

In 2021, Alla Gutnikova and three other editors of the Moscow student journal DOXA were arrested for “ inciting minors to take part in ille... 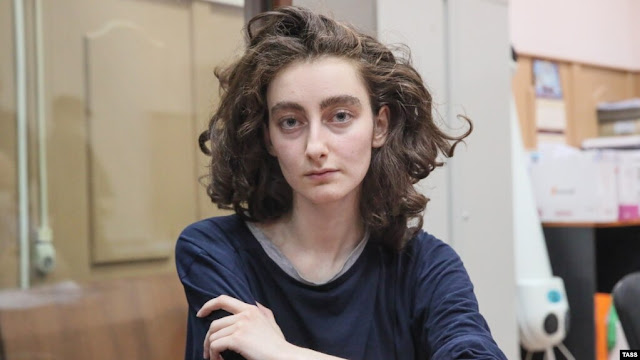 No questions are more intricate than those which relate neither to art alone nor to ethics alone, but to art and ethics at the same time. The philosopher who, at the risk of displeasing everybody, embarks on such questions, must take into account both the dignity and demands of moral life and the dignity and liberty of art and poetry.
Jacques Maritain
Art is not primarily conceptual or rational. Art is holistic and incarnate—simultaneously addressing the intellect, emotions, imagination, physical sense, and memory without dividing them.
Dana Gioia
All poetry is supposed to be instructive but in an unnoticeable manner; it is supposed to make us aware of what it would be valuable to instruct ourselves in; we must deduce the lesson on our own, just as with life.
Johann Wolfgang von Goethe