Something beyond the void 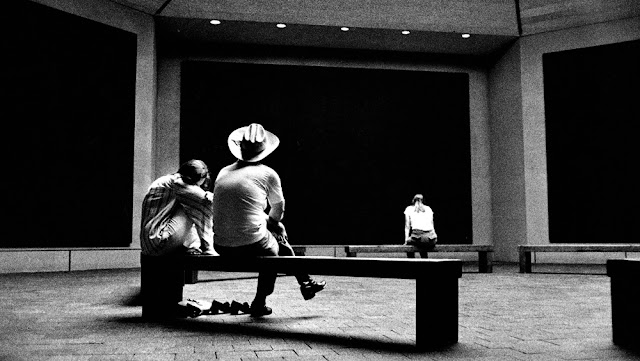 In his book Pictures and Tears, James Elkins describes the charged silence that fills the Rothko Chapel in Houston, Texas. The space holds fourteen "black" paintings created for the chapel by the artist that feel by turns funereal, reverent, mystical. "People have always cried at [Rothko's] paintings," Elkins reports, a phenomenon the artist regarded as quite reasonable. "The people who weep before my pictures," Rothko said, "are having the same religious experience I had when I painted them." There was a spiritual element to much of modernist abstraction, a sacredness that chafed constantly against the movement's existential doubt and postwar formalism. Most of the juicy metaphysical tension was drained out of modern painting by the Sixties, though there remains activity among artists from Eastern Europe, Latin America, and the Pacific to revive it—even some in this country, on the fringes. The essay appeared in the Playbill for the production of Red, the John Logan play about Mark Rothko, at Capital Repertory Theatre in Albany, New York, 19 April to 19 May, 2013.


A Communication About the World
The Art of Mark Rothko

Mark Rothko may be the last great artist of passion any of us will see in our lifetimes. The brooding Abstract Expressionist stands in the lineage of Michelangelo, Rembrandt, Goya, Turner, and van Gogh, artists for whom our most powerful human emotions—ardor, ecstasy, suffering, despair—were both the subject and motive of their work.  Whether Rothko’s shimmering and somber rectangles of color will achieve the immortality of the masters before him, time will tell. Like those earlier artists, he sought the essence of what it means to be human, and expressed it with a sublime and awesome presence unimaginable in our current age of irony.

There is a moment in Red in which Rothko rages after seeing an exhibition of the artists who followed him, including Jasper Johns, Roy Lichtenstein, Robert Rauschenberg, and Andy Warhol. “They’re trying to kill me!” he declares. “Superficial, meaningless sewage!” The scene is not literally accurate—Andy Warhol did not produce the paintings for which he is famous until a few years after the time frame of the play—but it is emotionally true nonetheless. Warhol and the rest of the innovators of Pop Art (it was called the “New Realism” when it first appeared) were indeed out to discredit, dethrone, and ultimately dismantle what Rothko stood for. And they succeeded, openly mocking their elders’ claims of existential and spiritual purity with an aloof, acidic irreverence and jaded cynicism that embraced the materialism, consumerism, celebrity, flash, and trash of modern culture, an ethos we have inherited. In real life, Rothko was introduced to Warhol on a Greenwich Village sidewalk; he turned and walked away without a word. If we were filming the scene today, where would we point the camera? On the expression of the older master as he composed himself in the throes of contempt, or on the young upstart, watching the old man disappear?

Rothko struggled for his success, experimenting through more than twenty years of successive genres and forms, from grim social narrative to mythic surrealism, before finding his mature style in 1949. His best paintings are triumphs of beauty and intensity, two or three blocks of glowing, soft-edged color stacked in a vertical field. He was widely considered America’s greatest living painter at the time he accepted the commission to paint the Four Seasons murals in 1958. He turned the canvas sideways, creating haunting friezes that seem at once shrouds, portals, and free-floating auras.

The painter once, only half ironically, offered a “recipe” for his art. The ingredients included “intimations of mortality,” “sensuality,” “tension,” “wit and play,” and “the ephemeral and chance.” Rothko often denied his paintings were “abstract,” by which he meant they were neither purely intellectual nor non-representational. Indeed, he most likely viewed his works as utterly literal renderings of the non-material but entirely real psychological awareness he depicted. Painting a picture, he once said, “is a communication about the world.” The last item in his recipe was hope. “Ten percent to make the tragic more endurable.”

Ultimately, the tragic became unendurable for the artist himself. “One day the black will swallow the red,” Rothko laments in the play. Despair, decline, and death overtook the chromatic splendor of life, and Rothko committed suicide in 1970 at age 66. The next year saw the opening of what the artist considered his greatest creation, the Rothko Chapel in Houston. The chapel holds fourteen paintings in an octagonal museum-cum-mediation center, each of them black, though to say so is somewhat misleading. Embedded in the darkness is an immanence of other hues—brick red, chestnut-brown, plum. mauve—that give the works depth, movement, mystery. Even as the color drained out, Rothko sensed something beyond the void.

Albany has its own Rothko, one of the gems of the Empire State Plaza Art Collection. The untitled 1967 work, on display in the concourse level of the Corning Tower, features a bright blue ground with a large, teal-green square floating above a charcoal rectangle. Like the blacks in the Rothko Chapel, the grey of the Albany Rothko is hardly static. Study it slowly. As your eyes grow used to the dark, the lower rectangle sheds its gloom and feels lit from within. There is no irony in the passionate eloquence of this effect. 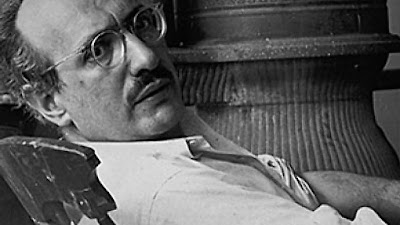 rothko's paintings inspire true awe, the few times i've seen them "in person."
this is a lovely essay, tim. beautifully written and capturing as well as possible the almost inexpressible pull of his great work. i too have long wanted to go to texas to see the chapel.

It sounds like a riveting play, another way of looking at Rothko's "One day the black will swallow the red. I just read Anne Carson's "Red Doc>". Carson and Rothko shared an interest in the ancients.
But "last great artist of passion"? How about Marisol Escobar, or Nancy Spero, or....?
My reaction to the art history curriculum was less enthusiasm and more like depression and claustrophobia.

my goodness. "between vision and sound." this essay, giving. this reader, receiving.

Mark Rothko was the last great artist of passion any of us may see in our lifetimes.
Wonderfully written, Tim.. albeit,
As a painter of passion and spirituality, and knowing many others who do as well, I have to disagree about the above statement; I am happy the word "may" is in that sentence.
I, too, cant wait to see the Chapel in Houston.

I hear you, Jane and Dorothea, regarding your reservations about the first sentence. It's not intended as a judgment on any artist since Rothko, many of whom are profound in their intention and expression. Rather, I am doubtful that the culture at large is prepared to raise to a level of "greatness"—that is, to a status of esteem, superior influence, and fame—any contemporary artist whose defining ethos is one of Rothko's earnest spiritual suffering. Nor, for that matter, any artist whose work is so resolutely outside history; i.e., politics and social commentary. The arc of that pendulum is long, and it's hard to see it swinging back in the forty or so years that constitute the remaining lifetime of most of the theater patrons for whom the essay was written (who tend, in general, to have long ago crossed the equator of middle age). All that asserted, a growing number of artists are once again addressing our deepest metaphysical instincts and needs, as I note in the post's introduction. Eventually, I am sure, one will tap into something so elemental and important it changes us. Who can say, maybe this will happen sooner rather than later? That possibility is the foundation of this site.

Thanks, J and D, for holding my feet to the fire on this point. And thanks too to you, Susan and Sherry, for your always generous and kind comments.

We come from nothing and return to it.
It lends us out to time; and when we lie
In silent contemplation of the void
They say we feel it contemplating us.
This is wrong, but who could bear the truth.
We are ourselves the void in contemplation.
We are its only nerve and hand and eye.