Other work prevented me from commenting on the observance of Martin Luther King's birthday earlier this week, one of those rare American holidays that, like Thanksgiving and, I don't know, maybe Arbor Day, hasn't been utterly co-opted by commerce. Once a year, then, we are each reminded of Dr. King's power as a leader of the Civil Rights movement, power to both change policy and stir the soul, all within a framework of non-violence. Before his assassination in 1968, King  had begun to speak out forcefully not just against racial inequity per se, but also the evils of the Vietnam War and economic inequality. As he told his supporters at the time, he'd reached the only logical ethical conclusion that injustice in one arena is lack of justice in all. 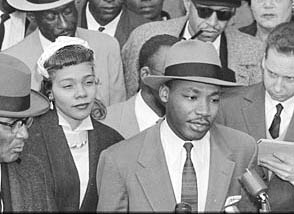 The foundation of King's philosophy was described with swift clarity by sociologist Gayle Sulik earlier this week in her website blog. I am just getting to know Dr. Sulik via email, and she has become a stimulating and inspiring new ally. Her new book Pink Ribbon Blues examines how activities of breast cancer awareness groups, while well-intentioned, often undermine efforts to improve cancer treatment. Her work has given her stark insights into questions of suffering, compassion, and hope, common ground we have begun to explore. Her recent posting, "The Heart of Social Reform: Dr. Martin Luther King, Jr." begins with a brief explanation of how King came to his ethic of non-violence through the work of Gandhi and Hindu philosophy:

Martin Luther King, Jr. was a reverend and scholar committed to social justice and nonviolent action that, above all, emphasized the power of love as a potent social force. King wrote six books and numerous articles on the subject, stressing the rational and moral necessity of “Love in Action.” How often do we hear those words in public debate these days? Yet, the most influential leader of civil rights in this country lived by, and led with, an ethic of love that went beyond his religious upbringing or his pastoral career. In fact, King’s philosophy of love and nonviolent resistance reflect a long contemplative journey.


“The intellectual and moral satisfaction that I failed to gain from the utilitarianism of Bentham and Mill, the revolutionary methods of Marx and Lenin, the social contracts theory of Hobbes, the “back to nature” optimism of Rousseau, and the superman philosophy of Nietzsche, I found in the nonviolent resistance philosophy of Gandhi.” 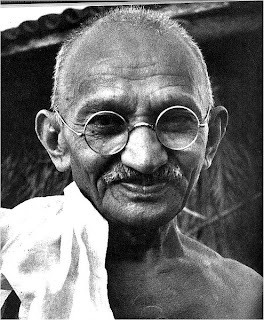 As I think about the direction I'd like to take the Center for Documentary Arts, I am increasingly drawn to the power of "love in action." The idea, as Gayle explains, is grounded in the Hindu concept of satyagraha, which designates a force "that originates in truth and love and is an instrument for social and collective transformation." The ways this applies to art become more and more obvious to me, but in fully embracing them I find I come up against decades of inculcation in modernist theories and notions of "art for art's sake." These ideas insist on the artist's essential autonomy and rail against expectations that art might, can, or even should serve a cause higher than itself. I am not at all prepared to reject these ideas, nor am I sure I even need to. My aim is to more completely articulate the intellectual foundation of the Documentary Center. I am aware, however, of how much the theories still define the mainstream of artistic thought.


Certain strains of post-modernism incorporate aspects of protest, activism, and critical commentary, though often at conceptual heights that elude the attention and comprehension of most of the population. So another part of my inquiry involves the familiar question of accessibility. I was moved by the quote Gayle chose from Stride Toward Freedom, in which King explains that the "moral and intellectual satisfaction" he sought to ground his instincts did not come from the western intellectual tradition, but from a love-based philosophy from India (which combined, of course, with his Christianity). My conclusions are far from complete on this issue, but more and more I suspect the truth I'm working toward does not so much resemble that of modernist thinkers or post-modern theorists, but rather is closer to King and others influenced by love in action.
at January 21, 2011

Thanks, Tim, for sharing my essay on MLK.

What's so interesting to me since we've started to converse about our work is how many similarities there are between the goals of art and science. That same pressure to value the "artist's essential autonomy" rather than expecting that it could, or should, serve "a cause higher than itself" is similar to the scientific expectation of detachment and the 'objective' pursuit of knowledge without investment in what it is we're studying. This is said to reduce bias, and sociology (especially qualitative researchers) have always dealt with this when analyzing social problems.

People like MLK and Gandhi inspire me to think differently. Yes, there is art for the sake of art; knowledge for the sake of knowledge. But in those moments when art and knowledge come together in a way that contributes to elevated consciousness and social betterment...that's magic. That's the kind of world I want to live in.

Amen, Gayle. The meaning of our lives is measured by what we bring to others, and, for some, to humanity as a whole. Some people do pure research that forms the basis of future discoveries; others make the breakthroughs that change lives. It matters if those changes are for the good of society or simply for profit. It is not enough to absolve ourselves by claiming we are cogs in a machine or insisting that if we didn't do the thing, someone else would. Courage avails itself equally to all.

virtue (vərCHu) n. 1. the general quality of goodness in a person, thing, or act. 2 ETHICS in moral philosophy, an emphasis on the role of character and integrity over duty or utility.

No questions are more intricate than those which relate neither to Art alone nor to Ethics alone, but to Art and Ethics at the same time. The philosopher who, at the risk of displeasing everybody, embarks on such questions, must take into account both the dignity and demands of moral life and the dignity and liberty of art and poetry.
Jacques Maritain

Art is not primarily conceptual or rational. Art is holistic and incarnate—simultaneously addressing the intellect, emotions, imagination, physical sense, and memory without dividing them.
Dana Gioia